You need about 4 min. to read this post
Author Graciela FaganPosted on 5 October 20208 March 2022 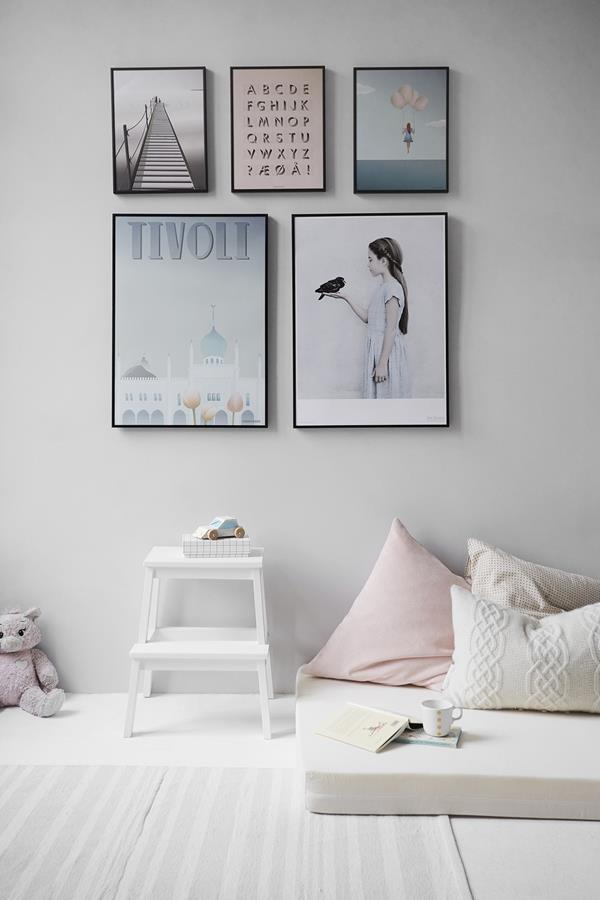 Posters used to be a permanent fixture in teenagers’ rooms. Today they successfully replace popular paintings and have been recognized as an interesting decoration in many apartments.

A dozen or so years ago posters mainly depicted teen idols, athletes, actors, singers etc. They could be found hung, or rather glued with scraps of transparent tape on walls or room doors. Young people usually took them from their favorite newspapers, so they were crumpled, made of thin paper – but that was not important. At that time they were not meant to serve a decorative function, they allowed young people to show their own “self”, their interests and passions

Nowadays posters successfully replace paintings. They can be found in every room of a house or apartment and they undoubtedly have an aesthetic value. However, contemporary ones are very different from those hung in the past.

Minimalism and class itself

Posters hung in apartments, are usually minimalist. Framed in antiframes, rarely in decorative frames, highlight the beauty of the interior, but do not dominate. Their advantage is that they can represent anything, so it is easy to match them to the style of the house, and in addition are a cheaper alternative to paintings. Very popular are posters with quotes of famous personalities – that is, a clear, interesting inscription on a white background (it also happens that it is only one word).

Botanical posters – ideal for the living room and not only

Interior designers fell in love (and infected their clients with this love) botanical posters. They are now considered to be an interior hit. The most popular are those minimalist depicting, for example, a large, green leaf on a white background. Such a proposal adds freshness to the interior, and in addition is very universal. Currently we observe a trend called “urban botanic”, where flora becomes an inspiration in the choice of wallpapers, home decorations, including posters. Some believe that this is a kind of response to what is happening in the world, namely the problems associated with ecology

Botanical posters are ideally suited for Scandinavian-style interiors. They perfectly harmonize with furniture and accessories made of wood in a natural shade. They are also perfectly combined with linen textiles and, fashionable in recent seasons, poppies.

A work of art on a poster? Absolutely!

Works of art in apartments are associated with paintings in rich, large frames. However, this is a decoration that does not fit into every interior and in addition – it can be very expensive

For several seasons in apartments you can find decorative posters, which can present works of the greatest artists, such as Picasso or Kossak. This solution fits perfectly into modern interiors, where a richly decorated painting would not look best. The poster must of course be in an antique frame, so that it looks aesthetically pleasing.

Posters that optically enlarge the interior – a hit in small apartments

If we have a small apartment we can optically enlarge it with posters. This is a common trick used by interior designers. The advantage is also the fact that posters can be easily ordered in any size, so it is easy to match a given design to the size of the wall on which it is to hang. To get the effect of a larger room or corridor, it is worth choosing graphics that depict open spaces, such as the sea, beaches or an endless bridge

Currently popular are also three-dimensional posters, which give even better effects. They can depict, for example, tunnels, roads, bridges or open doors

Poster to the kitchen? As much as possible

Today we care about decorations not only in the living room, but also in other rooms. Also in the kitchen, where hanging artificial fruits and vegetables, as it was done by our grandmothers, has long gone out of fashion. Now this room can be decorated with an interesting poster, but you need to remember about its protection, so that moisture and steam do not damage it. Graphics in the kitchen can depict, for example, coffee beans enlarged, fruit, a cup of tea, etc

Fight for better sleep! Tricks you should implement in your bedroom right away

Hammam ritual - learn how to take care of your body skin at home!

3 things to look for when choosing garden chairs

Author Graciela FaganPosted on 21 January 20228 March 2022
Here are 3 important things to look for when buying the perfect recliner.
Read More

Author Graciela FaganPosted on 4 August 20218 March 2022
These wall paintings are current decor trends. Check out where you can buy them.
Read More

A table in a small apartment?

Author Graciela FaganPosted on 29 December 20208 March 2022
Is it worth introducing a table into a small apartment? If so, which one to choose?
Read More

Author Graciela FaganPosted on 12 April 20218 March 2022
Bedroom is a room where we can relax. A few simple and proven tricks will make our bedroom look visually bigger and spacious
Read More